Sacred Site Paintings 2007-2010
Since 1987 I have participated with a group engaged in spiritual work at sacred sites throughout the world. This series express my attempt to create images that reflect my impressions of these sites. I have approached each site uniquely so that each painting corresponds in style and color to my visual and spiritual impressions. It is my hope that these paintings will encourage others to become aware of the existence of these sites and in turn, respond themselves spiritually, emotionally. and visually. The first showing of these paintings was held at the Lake Harriet Community Church in Minneapolis October 18 – November 29, 2008.

The Storr, Isle of Skye, Scotland 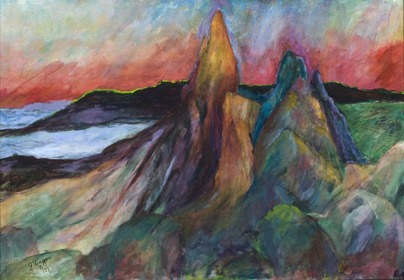 The Storr was the first sacred site I painted and commemorates my trip in 2002. The Storr, also known as the "sentinel" or "old man", serves as a beacon for spiritual travelers on the isle of Skye in Scotland.

In addition to the aesthetic appeal of the Storr, I believe I unconsciously chose this sacred site to paint first, because of personal reasons. The hike up this mountain was extremely difficult for me due to chronic asthma. Consequently, I was unable to fully appreciate the power of this site at the time. However, after connection through paint, I experienced the intensity, brightness and wisdom this sacred site offers and enjoyed doing several renditions. 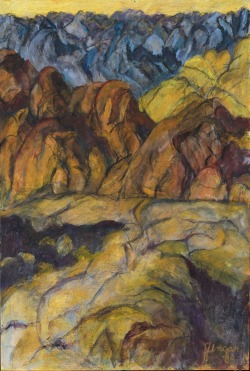 Mt. Sinai in Egypt, is at the center of the earth's second chakra.
We climbed Mt. Sinai twice. The first time was in 1990 during the daytime. The second time was at sunrise in 1993. This view is from the summit of Mt. Sinai shortly after sunrise on our second trip.
As with most of these sites, an arduous climb preceded the spiritual work. While photographic views portray the region as dry and dusty,
I tried to paint the energy I felt there in strong yellows, oranges and blues because I sensed the underlying life and fire energies of this spiritual place. 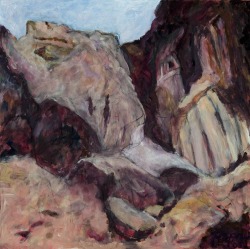 Israel is considered to be the fourth or heart chakra of the planet.
Our first trip to Israel took place in 1992. Although we visited many places in Israel, I chose the Pillars of Amran because they were awesome in the true sense of the word. While most of Israel is somewhat flat and green, the austerity of these pillars parallels the rugged determination and ability of the Israelis to build a prosperous nation against huge odds and further, to survive in difficult circumstances throughout the world for thousands of years.
In this painting, I used earth tones to denote the commanding
strength of this sacred site. 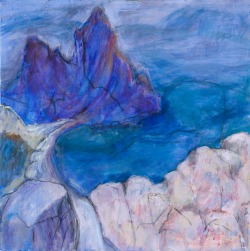 Lake Baikal in Siberia, Russia was one of the highlights of the group's trip in 1997. Lake Baikal, Mongolia and parts of China comprise the earth's fifth chakra. Lake Baikal holds 20% of the earth's fresh water and contains more species of plants and animals than any other lake in the world. The lake is revered by the Russians and others who visit it. Although I only participated in spirit, I wanted to portray the serenity, depth and beauty I felt after looking at photos of this amazing lake.

I used many layers of lazing medium with a variety of blues to capture the calm and deepness of this lake. 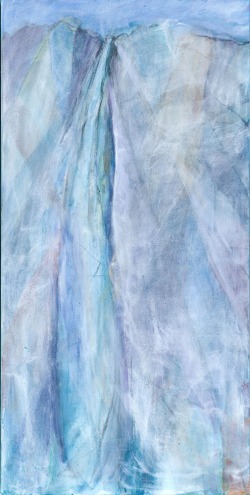 Angel Falls is the tallest waterfall on the planet which qualifies it as one of the seven wonders of the world.  Angel Falls in Venezuela  is part of the third chakra of the planet.  This trip took place in 1991. To get to Angel Falls, we took small boats down the Oronoco River.  As we looked up, we were surrounded by majestic mountains known as Tepuys. These Tepuys are the only remnants of the earth from its initial creation.  Some of our group actually climbed Mount Roraima, one of the Tepuys. They encountered unimaginable obstacles to accomplish this feat.

For me, the Falls were multi-dimensional, which I have tried to convey in my painting using overlapping transparent forms. I also find the Falls soothing as well as majestic. Therefore, I used a variety of blues combined with iridescent and interference acrylic paints.

Callenish, Isle of Lewis in Scotland 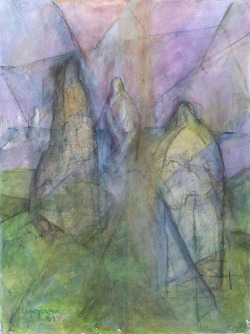 This painting commemorates our trip in July of 2002 to a circle of stones, called Callanish (also known as Caklanais), located on the Isle of Lewis in Scotland. This circle of monoliths is one of many to be found in England, Scotland, and Brittany, including Stonehenge. It is thought that the site has many astrological alignments and may have been used as an advanced lunar observatory over 1500 years ago.

This was the second sacred site I decided to paint and I have only included one rendition of this site. To me the stones are mysterious, multi-dimensional, subtle and anthropomorphic. I have therefore used monochromatic colors with iridescent and interference acrylic paints to portray my impressions. 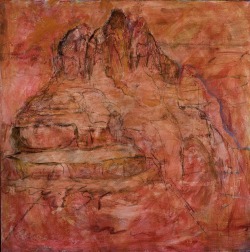 Sedona was the first sacred site we visited in 1987. Sedona is considered to be the center of the first chakra on the planet and has become a magnet not only for spiritual seekers, but also for thousands of tourists. Sedona has long been the movie location for many Western films. I tried to capture the redness of Sedona by using many glazes and barely outlining the landscape I chose. 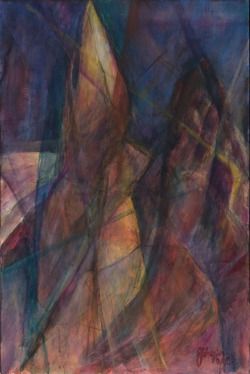 See above for fuller description.